This page is about socialism. In the past, especially in the 19th century, people calling themselves socialists have done many good things. This page does not want to offend anybody. In case you call yourself a socialist, that is fine with me! In a democracy everybody is allowed to have his own political opinions. In my personal opinion, not everything is good about socialism; there is definitely a darker side to the story.

Why a page about socialism?

The main reason for this website: people on the political left tend to criticize the political parties which are in favor of freedom and democracy. In Europe we have the European freedom-parties (for example in the UK there is the UK Independence Party, in Denmark we have the 'Dansk Folkeparti' = Danish People's Party, in Norway the Framstegspartiet = progress party, in Finland Perussuomalaiset = True Finns; in the Netherlands we have the 'Partij voor de Vrijheid' = Party for Freedom) and in for example the United States there is the Republican Party. There is nothing wrong with criticism and with fact-based discussions, but in practice some (extreme-) left politicians feel obliged to make the comparison between their political opponents and Adolf Hitler. Discussions about the mass immigration to Europe and to North-America invariably always end up in making comparisons with Adolf Hitler. Well, what is wrong with comparing the political right with Adolf Hitler? Wasn't Hitler 'extreme right'? This webpage gives the answers.

Where can Adolf Hitler be found in the political spectrum?

To be short: Hitler was not extreme right. Hitler was not right at all. Hitler was definitely left, green left (!); he was a convinced socialist all his life! Not well known but a historical fact is that Hitler was a good friend of the Islam!

Who voted for Adolf Hitler?

The voters of Adolf Hitler came from all layers op society, but especially from the left!

During the time that I was living in Germany, I noticed that all the former national socialists I knew tended to vote for the Sozialdemokratische Partei Deutschlands (SPD, the German socialist party). How is it possible that former voters for the 'Nationalsozialistische Deutsche Arbeiterpartei' (NSDAP) were now voting left and extreme left? This card of West Germany says it all: socialist areas of Germany in 1932 (national socialists) and 1972 (SPD) are almost exactly the same! 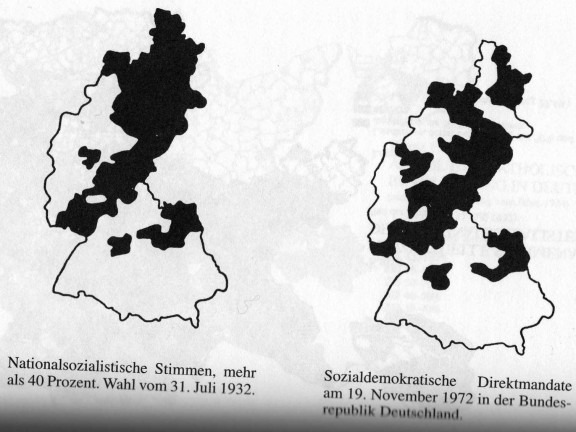 Günter Grass is a former volunteer in Hitler's (criminal) Waffen SS, and after the war he (as most other national socialists did) supported the SPD. After having been the face of the (extreme) left in Germany for more than 6 decades, in the year 2012 Günter Grass showed his old sick anti-Semitic face again; read the article 'Something rotten in Germany': http://www.ynetnews.com/articles/0,7340,L-4213037,00.html.

Why did so many socialists/leftists vote for Adolf Hitler?

Why is it no surprise that in the Weimar Republic the politically left people voted on masse for Adolf Hitler? There is socialism in many forms, but there is one thing that all types of socialism have in common, and that is envy, the hate against people who are supposedly guilty of having more (more money, more power, more influence, more success, more Nobel-prices) than other people. A famous example is the hate that many socialists had and in most cases still have against Jewish people. This hate is not triggered by concerns about crime-rates among the Jews. This hate is not triggered either by plummeting house prices as soon as a Jewish family becomes your neighbor. This hate has also nothing to do with the fear of becoming a stranger in your own country, fear of losing your freedom, fear of suicide-bombers, fear for civil war in the future. The hate of a part of the socialists against the Jewish people is caused by something which unites all socialists worldwide: envy, jealousy. Underneath a picture of a national socialist cartoon from Germany: 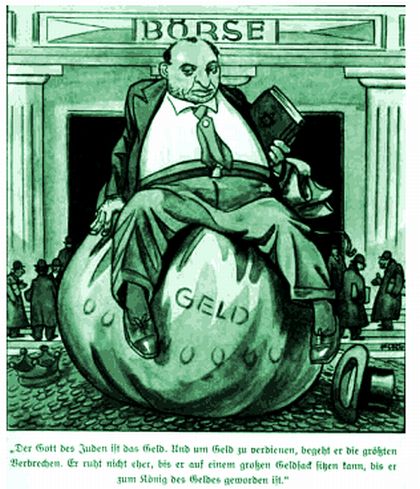 National socialist propaganda for German children from Julius Streicher's publication 'Der Giftpilz' (toadstool), 1938. The caption reads: 'The God of the Jews is money. And to gain money, he will commit the greatest crimes...'

John J. Ray (M.A.; Ph.D.) concludes, on the basis of all the historical facts:

( http://jonjayray.tripod.com/hitler.html ) "Hitler was not only a socialist in his own day but he would even be a mainstream socialist in most ways today."

( http://jonjayray.tripod.com/semitism.html ) "And it is no mystery why Leftists should be antisemitic. Hatred of success and prominence in others -- envy -- is the major driving force behind Leftism and Jews do have the perhaps unfortunate attribute of tending to be prominently successful in all sorts of ways."

Jewish people are, on average, far more successful and far more intelligent than any other group of people anywhere in the world. See for the staggering statistical facts the article http://immortallife.info/articles/entry/why-is-the-iq-of-ashkenazi-jews-so-high .

Nowadays the socialist hate against the jews is no longer called 'anti-semitism' but the more civilized word 'anti-zionism', which is supposed to be something totally different but in reality it is exactly the same. Nowadays the socialists worldwide call for a boycot of products produced in Israel. Anyone ever heard these socialists call for a boycot of, for example, products produced in Iran or Saudi-Arabia or any other of the world's most oppressive dictatorships in the world?

Here an excellent video explaining that Adolf Hitler did not only call himself a socialist, but that he has been a convinced socialist all his life: https://youtu.be/eCkyWBPaTC8

The Hitler myth: how is it possible that Hitler was and sometimes still is described as 'extreme right' by ignorant historians and some ignorant politicians?

The Hitler myth: http://gatesofvienna.blogspot.com/2009/05/hitler-myth.html It is a series of articles on the Hitler myth by Duns Ouray, as published at Het Vrije Volk (dutch ) and translated into English. It describes why leftist historians and scholars cultivated the myth that Hitler was right, while in fact his beliefs and his followers were predominantly left and extreme-left.

The real political spectrum is from total government to no government

Many leftists want you to believe that there is a political spectrum which is from extreme left (communism/marxism) till extreme right (national socialism, fascism).

The real political spectrum is from 'total government' to 'no government'. This is, after the factor of envy/jealousy, the second reason why leftists/socialists in the Weimar republic were more likely to vote for Adolf Hitler; the different types of socialists can be found at the same side of the political spectrum!

What do present national socialists think of the freedom-parties at the right of the political spectrum?

To answer that question there is an interview with Stefan Wijkamp, the 'Dutch Hitler', a personal friend of Joop Glimmerveen (former leader of the NVU), Florrie Rost van Tonningen (widow of Meinoud Rost van Tonningen, a prominent Dutch national socialist and traitor during the German occupation) and other prominent national socialists. He is usually present at meetings/demonstrations of Dutch, German and Belgian national socialists. In the following interview with mister Wijkamp he talks about his disgust for democracy (at 4:20) and (at 5:35) his disgust for the Dutch Freedom-Party of Geert Wilders. He calls Geert Wilders a 'Jodenknecht'. 'Jodenknecht' means 'Jew-servant'. In another interview mister Wijkamp stated that his vote goes to the Socialist Party in the Netherlands.

Some interesting articles in the Dutch language

The following article is about one question: was Hitler left? The answer is clear: Hitler was not just ordinary left, he was green-left!  http://www.meervrijheid.nl/?pagina=1199

About the close friendship and connections between Muslims and the national socialists between 1933-1945: https://en.wikipedia.org/wiki/Relations_between_Nazi_Germany_and_the_Arab_world

Is Fascism right or left?“He’s a fascist!” For decades, this has been a favorite smear of the left, aimed at those on the right. Every Republican president—for that matter, virtually every Republican—since the 1970s has been called a fascist; now, more than ever. This label is based on the idea that fascism is a phenomenon of the political right. The left says it is, and some self-styled white supremacists and neo-Nazis embrace the label. But are they correct? No, they are not! Here Prager University explains once and for all why fascism is, just as nazism, left, not right.
Fascism is a left wing movement